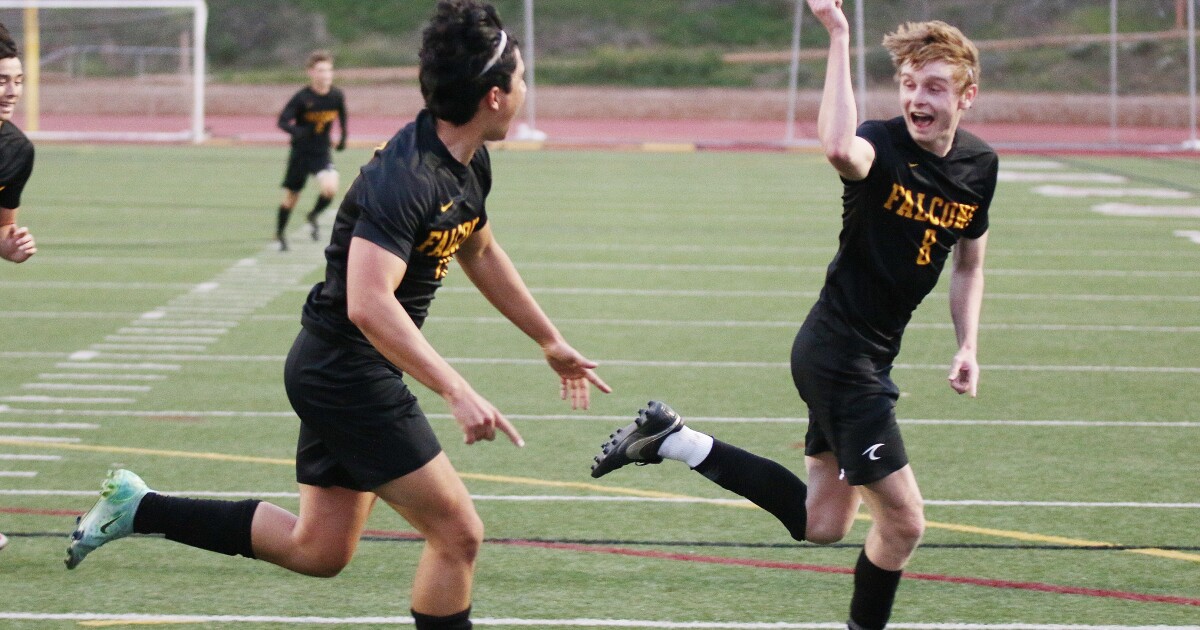 Given the historic stature of both programs, Tuesday night’s CIF Boys’ Open Division quarter-final between Cathedral Catholic and Torrey Pines seemed more suited to a semi-final or a championship game. After all, between the two, they’ve accounted for five (CC-3, TP-2) of the previous eight Open Division titles and only once have the two not been in the prestigious eight-team bracket.

But unlike most contests between these two schools, this one had an unequivocal favorite. Host Torrey Pines arrived with an 18-2-2 record, the North Coastal League crown and the No. 1 seed while Cathedral Catholic was an unusual 6-4-6 on the year, n managed only third in the tough West League and slipped as the eighth seed.

Unfortunately for defending champion Dons, the game reflected those numbers. The host Falcons were dominant in the first half – methodically effective offensively, relentlessly pressing defense – took an early lead and were never seriously threatened, claiming an impressive 5-1 victory. They will now host fourth-seeded Coronado, a surprisingly easy 5-0 winner over No. 5 Academy San Dieguito, in next Tuesday night’s semi-final, also at Torrey Pines. Torrey’s veteran head coach Andy Hargreaves was understandably pleased with his side’s performance.

“I think overall we were very solid defensively as a team and didn’t let up,” Hargreaves said. “We were clinical when we finished and the midfielder held on throughout the game.

“There really were no negatives.”

Cathedral Catholic head coach Nate Hetherington couldn’t find fault with his opponents either. “They have a lot of experience and with that a lot of game intelligence,” Hetherington noted. “Their movement off the ball ultimately made the difference.

The Falcons pounced on Cathedral from the opening whistle, keeping Dons senior goaltender Brady Bachman beleaguered for much of the night. After creating several dangerous early chances, Hargreaves’ charges broke through in the 10th minute. After a cross from senior Charlie Kosakoff exploded dangerously in the mouth of the goal, it was picked up on the far wing by another senior, Eli Zelkind, who sent it back into the box where a third senior midfielder , Mateo Pacelli, skillfully directed it past Bachman.

Just over five minutes later, senior centre-back Dylan Gleason slotted into the attack and volleyed a right-footed volley past Bachman. It looked like this one might get out of reach soon.

“We had put pressure on the goal and with the ball in the air I saw one of their defenders move to get it out,” said Gleason, who had just moved from midfield to strike. backline after Falcon star Tye Barton signed with the San Diego Faithful. “I tried to line up where I thought he would hit it and luckily it came straight to me – I played it to my chest and made good contact.

“I was super hyped. It was a big goal, to get us two up and build on the momentum we had already created.

Torrey Pines continued to control the flow of play but with just over five minutes to go, Cathedral appeared to get back into the game. A long cross free kick from senior Robert Ronco was headed into the net by a Connor Douglas and the deficit was cut in half. The score remained 2-1 at half-time, but any hopes of Don returning in the second half were quickly dashed.

Four minutes and 30 seconds later, Zelkind was fired inside the box and Kosakoff netted a penalty into the bottom right corner to restore the Falcons’ two-goal lead. Five minutes later, Zelkind fired a cross into the box from deep on the right wing. After a scramble in front of goal, the ball bounced off TP midfielder Mikey Sherlock and he set it down from close range. With 15:20 remaining, a deft pass from Pacelli set Andrew Mitchell and the elder fired low on the other side for the game-ending score.

“Nate (Hetherington) is a great coach and Cathedral plays a good style,” Hargreaves said. “If you don’t have good midfielders they can take over a game. Our midfielders, Pacelli, Dre (Andre Philibbosian), Mikey (Sherlock) and Juan (Serrano) are all super good, which largely explains our success tonight.

As a sophomore, former midfielder Gleason was dropped from TP junior college for the 2020 post-season, but did not play during the team’s sectional title race. Last year, as holders, the Falcons made an exit in the first round of the CIF, beaten, 2-1, by Saint-Augustin. This experience was on his mind on Tuesday.

“Game 1 of the playoffs is really tough and after being knocked out in the first round last year, that’s kind of the weight on our backs,” Gleason said after the game. “We wanted to get rid of that.

“It’s great, especially to play as well as us. It was like the first “real” CIF victory for me.

Hargreaves says his team will be ready for Coronado (16-0-2), which has a +61 season goal differential and is the only undefeated team on the field.

“It’s going to be a tough game,” Hargreaves said. “But, if we play our game the way we can, we can beat anybody. We just have to make sure our mindset is the right one.