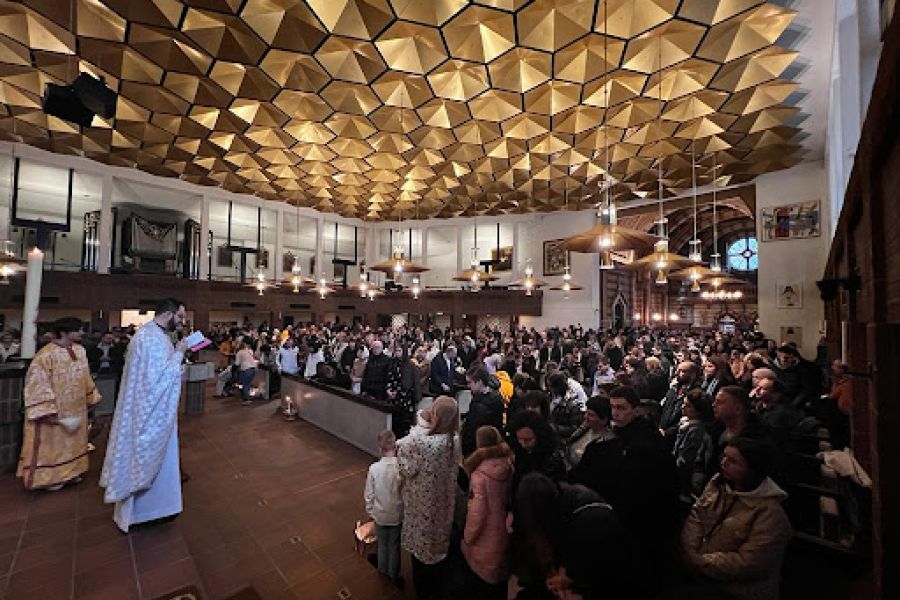 “Despite an extremely difficult situation and difficult times for our country, Ukrainians in Sweden do not feel alone.”

The cathedral in Stockholm, Sweden, was packed to capacity last Sunday as Ukrainian Catholics in the Scandinavian country celebrated the Easter liturgy.

“What happened was that some people were standing outside the church because it was too full and impossible to get in,” Father Andriy Melnychuk told CNA on Wednesday via email.

Father Melnychuk is the rector of the Ukrainian Catholic Mission in Stockholm, the only Catholic diocese in Sweden. He said that before the outbreak of full-scale war in Ukraine, about 400 to 600 Ukrainian immigrants frequented the parish. But he estimated that 700 to 800 Ukrainian Greek Catholics were present for the Divine Liturgy in St. Erik’s Cathedral on Sunday April 17.

According to figures from the Swedish Migration Agencysince February 24, more than 33,100 Ukrainian citizens have applied to enter the country as refugees.

Cardinal Anders Arborelius of Stockholm attended the Easter liturgy and told Melnychuk he had never seen the cathedral so full.

“I must admit there were mixed feelings before and after the Easter liturgy,” Fr. Melnychuk said. “During the liturgy, however, all feelings have been put on hold, as we step into an ‘other’, divine reality when we pray.”

“On this day we celebrated God’s victory over evil, over death. We trust that we are heirs of God’s victory. We also understand the price of this victory, so as we celebrate Easter this year, we place our trust in God as always,” the priest said.

“Despite an extremely difficult situation and difficult times for our country, Ukrainians in Sweden do not feel alone,” Fr. Melnychuk said, explaining that they have received a lot of support from the local Catholic Church, Protestant churches and charities.

“All of these offers to support us in difficult times are very important and appreciated,” he said. “The most necessary and important support for us is prayer. Human possibilities are limited. Obtaining all the answers to the questions of the present day, or obtaining solutions to all the problems we have now, is impossible with human strength alone. This is why prayer with us and for us is extremely important.

The majority of Ukrainians, almost 80%, are Eastern Orthodox Christians. About 9% of Ukrainians are Greek Catholicthat is, they are Catholics belonging to Byzantine Rite Churches.

The vast majority of them belong to the Ukrainian Greek Catholic Church (UGCC), which is led by Major Archbishop Svyatoslav Shevchuk of the Ukrainian Archeparchy of Kyiv-Halych.

The Byzantine Rite celebrates the liturgy in the form used by the Eastern Orthodox Churches, regularly using the Divine Liturgy of Saint John Chrysostom. It also follows the Julian calendar, which means that certain feast days are celebrated on a different day from Roman Rite Catholics, who follow the Gregorian calendar.

Ukrainian Greek Catholics in Ukraine, for example, are in Holy Week this week, in preparation for Easter Sunday, which they will celebrate on April 24.

But many Ukrainian Greek Catholic communities outside Ukraine have chosen to follow the Gregorian calendar, in union with the majority of Christians in their adopted country.

Father Melnychuk said his parish in Stockholm decided to adopt the Gregorian calendar in December, and it was the last to do so among Ukrainian Greek Catholic parishes in Scandinavian countries.

“This issue has been discussed for a long time, so the timing of the change was not a surprise but a thorough decision by the parish,” he said. “The large number of Ukrainians joining the Easter liturgy according to the Gregorian calendar was a good proof of this.”

He explained that members of his parish have come from all over Ukraine, but the majority come from the western part, where most Catholics are concentrated.

The priest said that the situation was constantly changing, as a large number of Ukrainian refugees were arriving in Sweden. “Now it’s almost impossible to talk about specific numbers, because that’s changing as we speak: a lot of people are arriving here but also a lot are already returning home.”