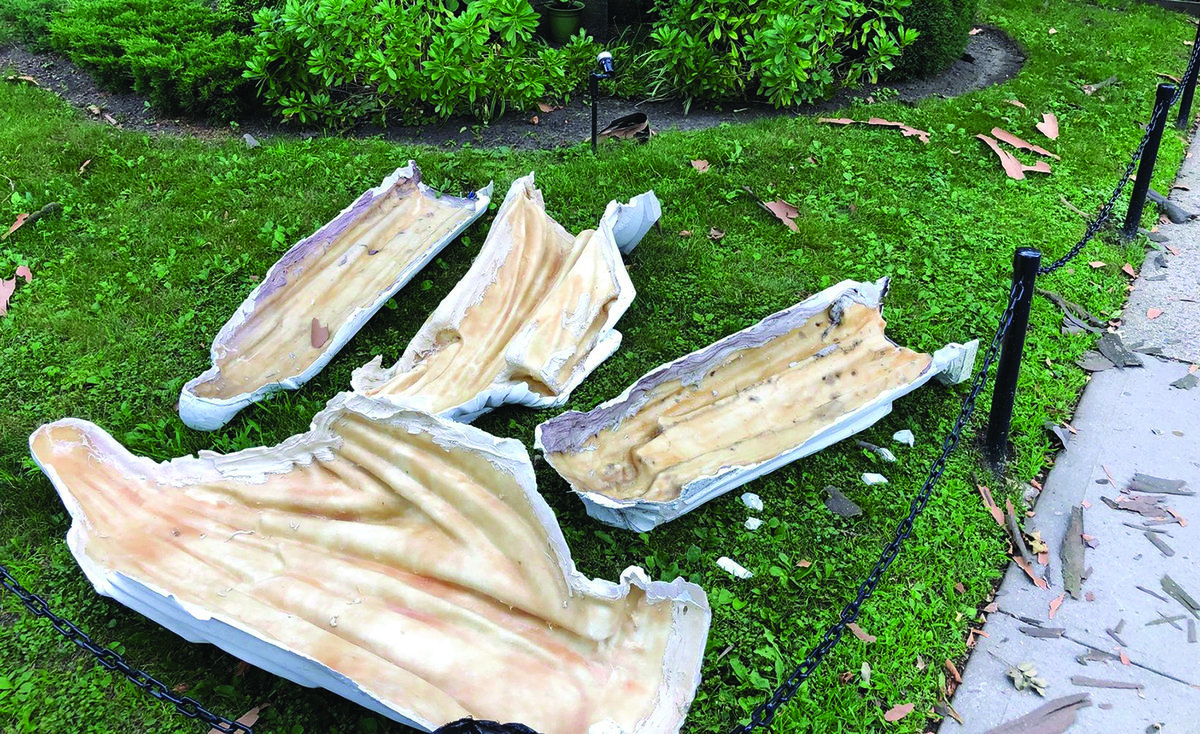 Update: Reported vandalism outside local Catholic church is among many such incidents nationwide – Catholic Standard

An act of vandalism last week outside the Catholic Church of the Annunciation in northwest Washington, DC is the latest in a series of acts of vandalism and destruction at Catholic churches and other Catholic properties across United States.

On October 22, a swastika was found painted on the pillar of the parking lot of the Catholic Church of the Annunciation. It was first discovered by one of the parish school teachers who arrived on the property before the start of the school day. It has since been covered.

According to a parish statement, “the incident was reported to the DC Metropolitan Police Department (MPD), which appointed an investigator and classified the graffiti as a hate crime.”

“At the moment, we have no indication that this incident is specifically linked to our parish or our school, nor any information on the motivation behind it,” the statement said. “However, there have been over 100 acts of hate vandalism and other property damage at Catholic sites nationwide since May 2020.”

Father Charles Cortinovis, who is priest secretary to Cardinal Wilton Gregory and also executive director of the Office of Ecumenical and Interfaith Affairs of the Roman Catholic Archdiocese of Washington, contacted several neighboring congregations “to alert them that this is happening in the community.” . “

He said he contacted the Washington Hebrew Congregation, the Hagia Sophia Greek Orthodox Cathedral and the National Cathedral, all located not far from the Church of the Annunciation.

“We weren’t inviting sympathy, but wanted to let people know what was going on,” he said. “We didn’t contact them to make them feel bad for us, necessarily, but to be aware of it. We wanted to let our neighbors know that there are people who are willing to publicly display hateful behavior against a religious congregation.

Noting that the vandalism was a painted swastika, Father Cortinovis said: “People recognize the swastika as a symbol of hatred, and it is hatred that can be directed against anyone.

Father Cortinovis said that reflecting on the incident could stimulate efforts “to educate our own parishioners about the existence of this type of behavior and get us to work to promote unity, tolerance and love for our neighbor. not only in our parish, but in our community. “

The swastika painted at the Annunciation is similar to acts of arson, vandalism and other destruction at Catholic sites across the United States. The United States Conference of Catholic Bishops has reported that at least 104 incidents have occurred in 29 states since May 2020. Incidents include arson; statues beheaded or with limbs cut, broken and painted; gravestones disfigured by swastikas and anti-Catholic language and American flags beside those burnt gravestones; and other destruction and acts of vandalism.

“These incidents of vandalism range from the tragic to the obscene, from the transparent to the inexplicable. There is still a lot that we don’t know about this phenomenon, but at a minimum, they underscore that our society is in dire need of God’s grace.

“Either way, we must reach out to the guilty through prayer and forgiveness. It is true that where the motive was retribution for a past fault of ours, we must be reconciled; where the misunderstanding of our teachings has caused anger towards us, we must provide clarity; but this destruction must stop. This is not the way.

“We call on our elected officials to come forward and condemn these attacks. We thank our law enforcement authorities for investigating these incidents and for taking appropriate action to prevent further damage. We are also asking for help from community members. These are not simple property crimes – it is the degradation of visible representations of our Catholic faith. These are acts of hate.

Meanwhile, on October 27, the Council on American-Islamic Relations (CAIR), a Muslim civil rights and civil rights organization, condemned what it called “neo-Nazi vandalism” to the exterior of the Church of the Annunciation.

In a statement, Ibrahim Hooper, CAIR’s national communications director, said: “Any bias-motivated attack on a place of worship is unacceptable. We condemn this heinous act and welcome the hate crime investigation. We stand in solidarity with the Catholic community and all other targets of hatred and sectarianism. ”

The Catholic News Service reported that in response to such attacks and vandalism on Catholic properties, the Committee for Religious Freedom launched the “Beauty Heals” project featuring videos from various dioceses discussing the importance of art. sacred.

At least 10 videos are available on YouTube; a link to the playlist of all videos is available at https://bit.ly/3peNq3o.

“We have a wonderful parish and school community at Annunciation, which is why we are very disturbed by a recent act of vandalism here,” the Annunciation statement said. “We are committed to being a welcoming and safe community and we also ask you to join in prayers for those responsible for this incident and for those who have been injured as a result. We all need the healing grace of God.

Grant to repair the historic window of Shrewsbury Cathedral