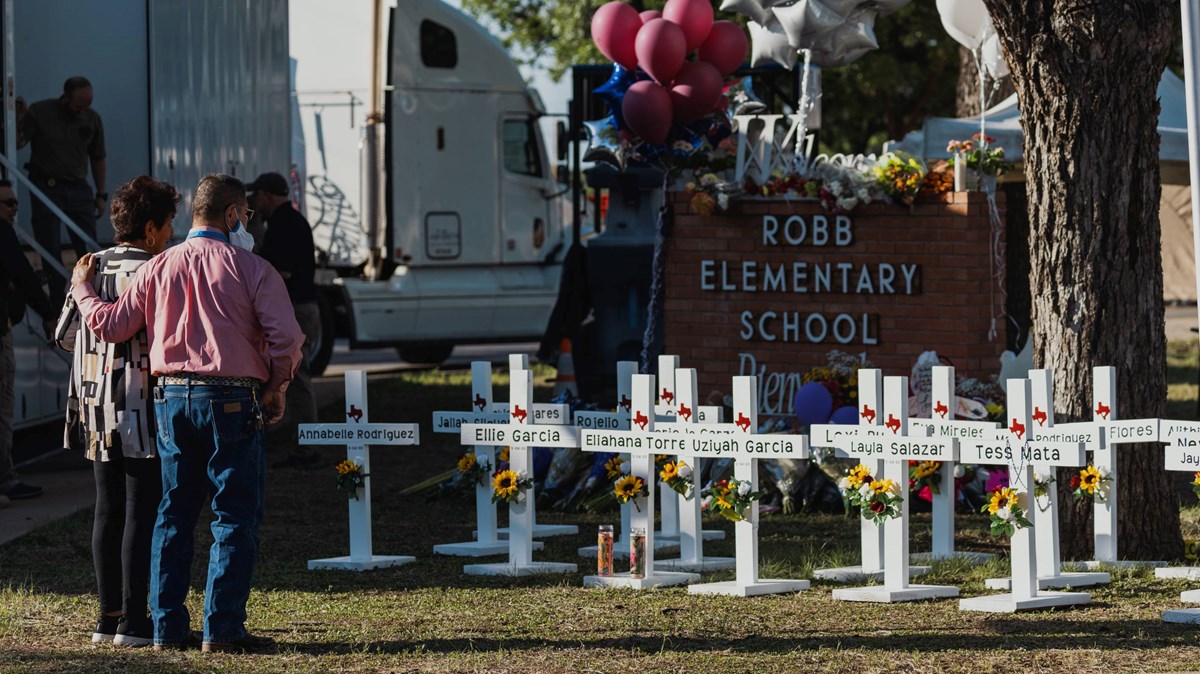 In the sleepy town of Uvalde, Texas, home to 16,000 people, almost everyone has a connection to the children, families and teachers shaken by the deadly shooting at an elementary school.

“I was watering my flowers in the front yard when I heard gunshots ring out,” said Julian Moreno, former pastor of Primera Iglesia Bautista. Moreno lives two blocks from Robb Elementary School, where an 18-year-old gunman killed 19 children and two teachers on Tuesday.

Minutes after hearing the shots, Moreno said he saw two police officers running down the street. Then, a gunfight so close he could smell gunpowder.

Knowing that his great-granddaughter, Lexi, was a student at the school, Moreno walked to campus once the gunfire stopped.

He later learned that the attack took place in 10-year-old Lexi’s classroom and that she was among the victims.

Outside the school, Moreno said, the atmosphere radiated fear, as parents demanded to enter the barricaded building. Texas Department of Public Safety (DPS) and Border Patrol agents yelled at each other as they put on their gear and approached the school.

“People were talking loudly, many were crying,” he said. “They were like, ‘My son or my daughter is in this building,’ and the officers were just like, ‘I’m sorry, you can’t go any further.'”

Located 80 miles west of San Antonio, an hour from the Mexican border, the town of Uvalde is 82% Hispanic, with a large Catholic and Baptist population. About 20 local churches have united in support of their community, now known as the site of the third deadliest school shooting in the United States.

Because he is a religious leader, community members have turned to pastors like Moreno to guide them through their grief. Moreno mostly prayed with his granddaughter Kimberly Mata-Rubio, Lexi’s mother, who “was completely shocked.”

After the honor roll ceremony earlier today, Mata-Rubio wrote, “We told her we love her and would pick her up after school. We didn’t know it was goodbye. She sobbed as her husband spoke about Lexi on CNN on Wednesday.

“I have to be as strong as possible so that I can serve my family in particular,” Moreno said.

In such a small town, many people called to provide spiritual support are themselves grieving. The whole place is devastated.

” It is a small city. Everybody knows everybody,” said Joe Aguilar, Texas Baptist Regional Representative for the Rio Grande Valley. “They’re going to need a lot of help.”

Texas Baptists reported that Aguilar traveled to Uvalde on Tuesday to pray with community members outside of the school and helped coordinate chaplains to help local pastors.

“You want to make sure that the people providing care are trained, because we want to give the best help, the best assistance to these families who are going through the worst part of their lives. And not just anyone is prepared for something like this,” he said.

Anyra Cano, adjunct professor at Baptist University of the Americas and wife of the pastor of Iglesia Bautista Victoria en Cristo in Fort Worth, planned to travel to Uvalde to work with parents to “help their children cope to their fears.

Neftali Barboza, pastor of Iglesia Nueva Jerico, had just picked up her son early at Robb Elementary before the attack. The funeral home opposite the school was full of terrified children and Barboza was called in to comfort them.

“I stayed and helped take care of the kids,” he told Baptist Press. “I let as many parents as possible know their child was safe.”

The Pew Research Center found that 24% of Americans say their faith grows stronger in times of tragedy, and churches often have heavy attendance on weekends after a horrific event. Pastors like Barboza prepare for full services, funerals and prayer meetings as community members gather to treat and mourn together.

Ministers held a packed prayer vigil at the Uvalde Fairplex Arena on Wednesday evening, attended by Governor Greg Abbott and U.S. Senator Ted Cruz. Amid worship songs and remarks, Baptist Temple pastor Tony Gruben prayed that “God would heal their little hearts and little souls.” Some prayed in small groups, while others sobbed during a solo violinist’s rendition of “Amazing Grace.”

On Thursday, the Catholic parish of the Sacred Heart in Uvalde also held a prayer service for the victims.

Pastor Doug Swimmer of The Potter’s House Church told ABC News he went to pray with the families at the hospital. In addition to the 21 people killed, 17 others were injured in the attack.

“I know one thing that will help us is God’s grace and God’s love,” he said. “What the world needs and what our community needs is a light that shines in the darkness.”


[ This article is also available in
español. ]

The spirituality of creation: another way of seeing Christianity