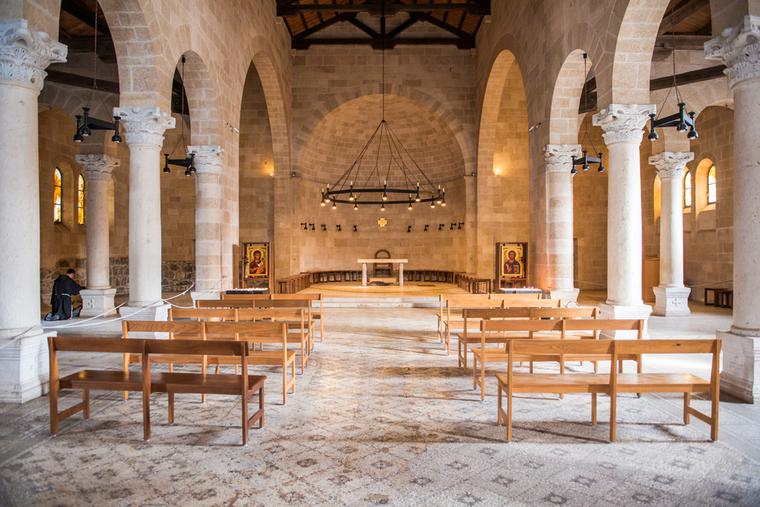 Georg Roewekamp, ​​a representative of the German Holy Land Association (DVHL) which owns the church’s property, called the theft an “anti-Christian” act.

TABGHA, Israel – Vandals stole a cross from the Catholic Church in the Holy Land built on the site where tradition has it that Jesus performed the miracle of multiplying five loaves and two fish to feed 5,000 people.

Israeli police are investigating the theft of a six-inch iron cross from the Church of the Multiplication of Loaves and Fish in Tabgha, AFP reported on August 21.

The cross had been encrusted in an outer altar made of volcanic basalt rock that was used for Catholic Masses offered along the shores of the Sea of ​​Galilee where the church is located.

Georg Roewekamp, ​​a representative of the German Holy Land Association (DVHL) which owns the church’s property, called the theft an “anti-Christian” act.

“Because the cross was very well fixed in the basalt stone, it was removed but it was not by chance,” Roewekamp told AFP.

This is not the first act of vandalism against the Church of the Multiplication of the Loaves and Pisces in recent years.

An arsonist set fire to the church property in June 2015, severely damaging the entrance to the church, the adjoining Benedictine monastery and the pilgrims’ office. Hebrew graffiti left on the site read “all idols will be shattered.”

Following the arson, a monk and a member of staff were hospitalized and treated for smoke inhalation. The damage caused by the fire was estimated at $ 1 million. The Israeli government paid nearly $ 400,000 for the repairs.

A 23-year-old Israeli extremist has been convicted of aggravated arson and two criminal association counts for the December 2017 bombing.

In recent years, Christians say they have been attacked by certain groups of Israeli settlers in traditionally Christian areas, and attacks on Christians have also been documented in Jerusalem. Most Christians in Israel are Arabs.

The Benedictine Dormition Abbey in Jerusalem has been vandalized five times in recent years, including with anti-Christian graffiti written in Hebrew. In 2014, an assailant attempted to burn down the abbey.

In 2020, there was an attempted arson attack on the Basilica of the Agony, located on the Mount of Olives in Jerusalem near the Garden of Gethsemane. The church houses a section of rock where Christ prayed the night before his crucifixion.

The fire was quickly put out after a 49-year-old Jewish man poured flammable liquid inside the church and started a fire that damaged a Byzantine mosaic.

Vandals also smashed stained glass windows and destroyed a statue of Mary in St. Stephen’s Church at the Salesian monastery of Beit Jamal, 40 kilometers west of Jerusalem, in September 2017.

The current Church of the Multiplication of the Loaves and Fishes was built in the 20th century, although a church was first built on the site at least in the middle of the 4th century. The current church has 5th-century mosaic floors, which were not destroyed in the arson.

The Benedictine monastery attached to the church was founded in the 20th century. The current building was inaugurated in 2012, including a private oratory for monks which was funded with support from Aid to the Church in Need.

Saint John Paul II visited the Church of the Multiplication of the Loaves and Pisces during his apostolic journey to the Holy Land in 2000.