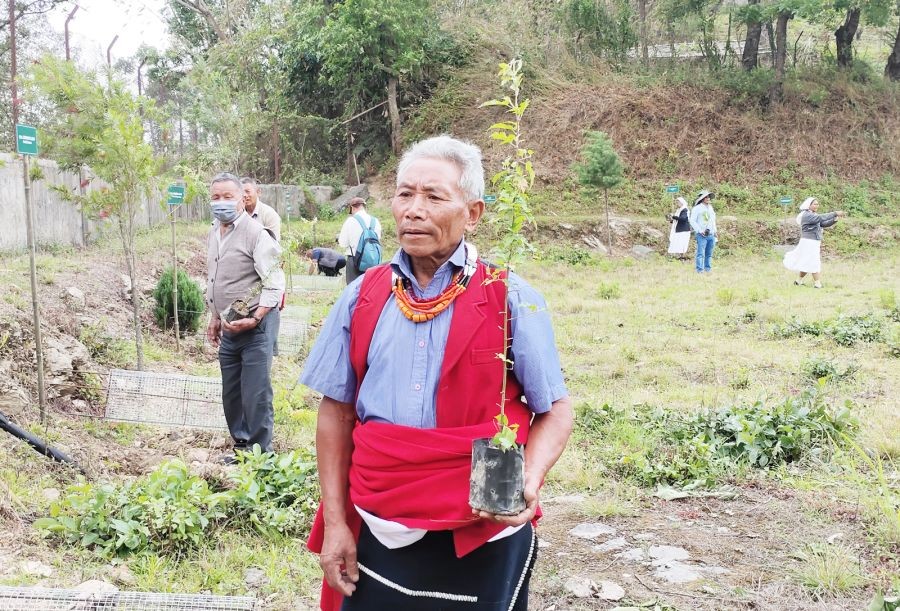 Yose Chaya, 77, takes part in the mass planting campaign of fruit trees in Viswema village on May 3. (Morung Photo)

Presenting the true values ​​of being a Christian upon which the foundations and principles of Christianity are based, “to work humbly with others for the common good and to serve the people”, the citizens of Viswema village, Kohima district, together to plant fruit trees. .

Irrespective of denominations, villagers gathered at the grounds of St Joseph’s Higher Secondary School in Viswema village to launch the mass planting campaign of fruit trees themed “Lo-The-Wu”, which means “planting to grow fruit” on May 3 morning.

The theme song written and composed by Keneikrul Noswe, Head of Environment and Beautification Committee was performed to mark the day.

Organized by Viswema Baptist Church in preparation for the celebration of 100 years of Christianity in Viswema in 2028 themed “waiting on the Lord”, it envisaged planting 7,000 local fruit trees in and around the village. Neichute Doulo, Associate Director of Entrepreneurs, also donated an additional 1,000 tree tomatoes (tamarillo) from Khonoma village.

The planting campaign saw the participation of members of the Baptist Church, Christian Renewal Church, Catholic and non-theistic Church, and village authority including youth, students and women.

“Planting trees is giving back”
Speaking on the inaugural program as a special program, Reverend Dr Atsi Dolie, Executive Director of Angami Baptist Church Council (ABCC), said, “This is a very good start for the celebration of 100 years of Christianity”.

“Our God is a giving God, and to plant trees is to give back to the earth and its inhabitants,” Dolie said and hoped that these trees would bear fruit and further beautify God’s creation of this beautiful world. and its inhabitants.

Rev. Dr. Zelhou Keyho, Secretary General of NBCC, as guest of honor, maintained that it is important for every person to improve, nurture and protect nature by planting trees. Praising the Viswema Baptist Church for this initiative, he was optimistic that in a few years people will reap the benefits, in addition to beautifying the village and providing shade for birds and people.

Celebration of “Christ at Viswema”
“Our intention is not denominations but ‘Christ in Viswema’ as we want to celebrate with all denominations and non-Christians too,” said Dr Hovithal Sothu, head of the Centenary Planning Committee, speaking in program margin.

Briefly explaining why the planting campaign was conceptualized, he said “Knowing well where many fruit trees and normal trees are felled for domestic use, we decided to make a change by planting local fruit trees.”

In preparation for the planting campaign, Sothu said it launched its own nurseries in 2021 with seven varieties of local fruit trees. As the local fruit trees are rapidly disappearing, he said they collected seeds from various places.

He went on to mention the benefits of planting fruit trees which not only rejuvenate the nature but also the prospects for improving the economy of the people.

Plant today, harvest tomorrow
Sothu also remarked that his intention is that “everything we plant today should be able to grow and bear fruit.”

Observing that many times plants have wilted after a planting campaign due to lack of care, Sothu said, all plants planted will now be cared for. New fruit trees will be replanted if the tree is dead or withered.

Fruit trees will be planted on all the circular roads in the village, and the rest will be planted in the gardens of each household, Sothu informed and added that in the coming days many beautification practices will be carried out in decorative plants and flowers.

He was informed that the protective barricades made of iron and wire mesh were donated by private individuals in the village and other places as well, which cost around Rs 600 per piece.

Interestingly, Yose Chaya, 77, who is also the Nagaland Indigenous Faith Council councilor participating in the planting campaign, said, “Today I am planting this wild apple tree in the hope of reaping the fruits after a few years “.

Before planting the tree in a designated place with its nameplate, Chaya sought the blessings of nature to care for the tree and bear healthy fruit.