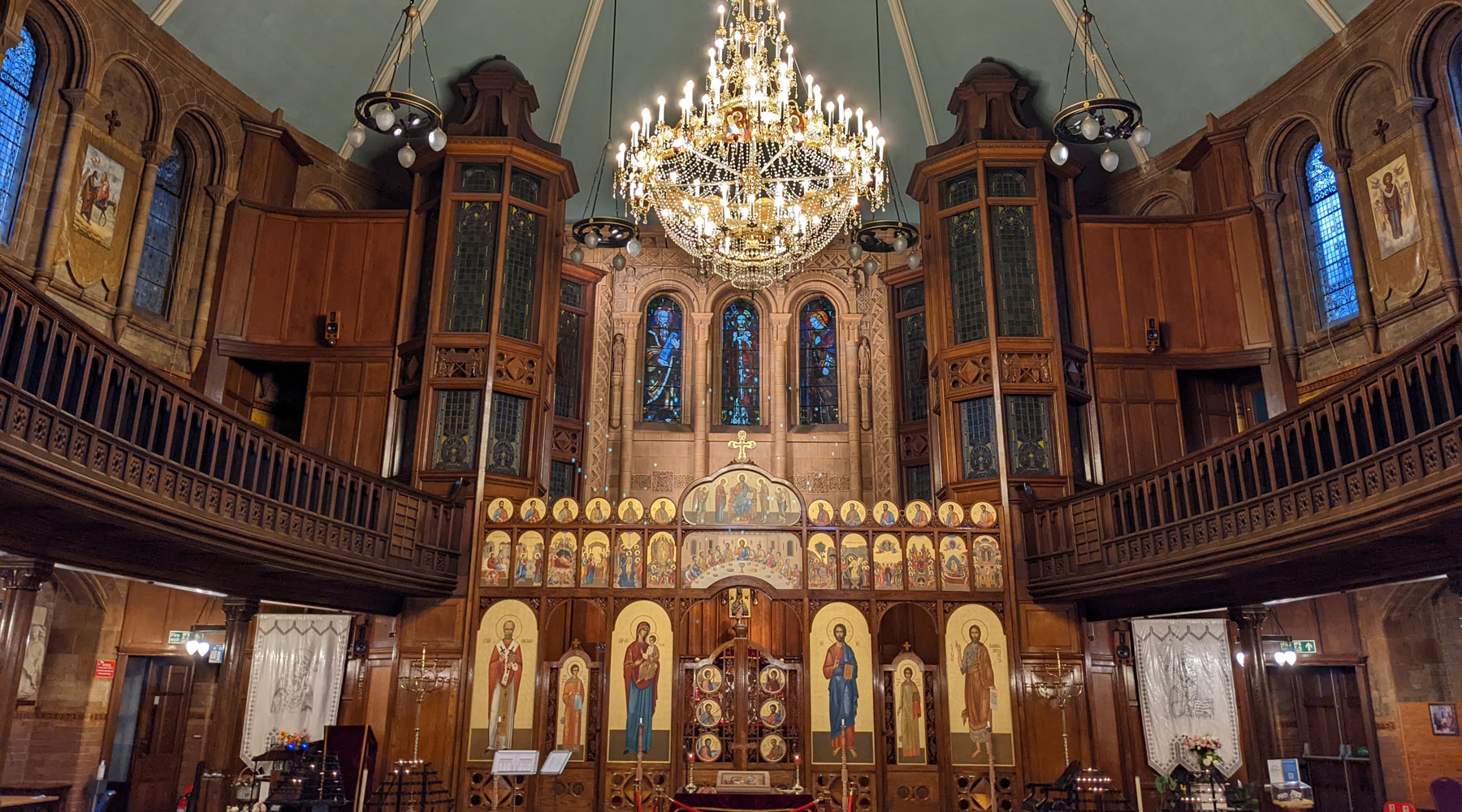 Visit the Ukrainian Cathedral in London

For obvious and less obvious reasons, now is a great time to visit the Ukrainian Catholic London Cathedral, which sits just off Oxford Street in central London.

The obvious is from what is happening in this country, but the less obvious is that, unusual for a Catholic cathedral, the doors are usually locked. My hairdresser (very well by the way) is next to the cathedral, and the handful of times the doors were unlocked when I walked past were for private service, so I never walked past the front doors.

For all the wrong reasons though, right now the doors are open and inviting people to come and pray for Ukraine. It is therefore a rather rare opportunity to see the interior of a very impressive building. However, it was not built as a Catholic cathedral and indirectly owes its existence here to the construction of the London Underground.

As early as 1685 a Protestant Calvinist Congregational Church was established in the City of London, and after growing in size, in 1833 it moved to a larger site near Fish Street Hill. Only 50 years later however, this site was needed for the construction of the Monument tube station, so the church had to disappear.

The Fish Street Hill entrance to Monument Station is where the church used to be.

Needing a new home, the congregation was offered land for pepper rent near Oxford Street and they commissioned a very large building designed by Alfred Waterhouse, using the compensation from the sale of their old church. If you think it has a certain familiar appearance, that’s because Alfred Waterhouse also designed the Natural History Museum.

The church opened in 1891, but over the decades the congregation dwindled until in 1966 it closed and the church was put up for sale. It was at this time that a Protestant church became a Ukrainian cathedral. A few alterations to add the necessary level of stationery to the interior decoration, and the cathedral opened in 1968.

The rationale for a Ukrainian Catholic cathedral here is that in the 19th century and after World War II there had been Ukrainian migration to London and Manchester, often worshiping in small immigrant hostels. Finally, in 1957, then-Pope Pius XII established an Apostolic Exarchate for Ukrainian Greek Catholics, which was later elevated to an eparchy (bishopric in its own right) by Pope Benedict XVI in 2013.

So they needed a cathedral, and this empty church was an ideal choice for them.

The normally grand but unadorned exterior of the church had gained ribbons in the now very familiar blue and yellow of the Ukrainian flag, and just a quick hop up the stairs and through the doors to step inside. The cathedral here features a classic Italianate round-arched design, using hard brick and buff terracotta, and is typical of Waterhouse’s work elsewhere. In fact, if you stripped out the religious aspects, the cathedral could easily be mistaken for a gallery in the South Kensington Natural History Museum.

Dominating the other end, however, is something added later, the iconostasis, a wall of icons and religious paintings, used to separate the nave from the sanctuary. This impressive work was created by a Ukrainian monk, Juvenalij Mokrytsky, and for us less religious visitors there is a helpful guide alongside what each of the painting sections refer to.

The cathedral suffered damage in 2007 when part of the ceiling collapsed, but it has been repaired, and it is difficult today to distinguish which part of the ceiling is new and which is original. It’s a fairly simple ceiling, but with so much decoration at eye level, it’s probably just as well that there’s space to rest tired eyes as they gaze skyward.

In one corner is a large stone carving of the Holy Family, salvaged from Saffron Hill Church, the original place of worship for the Ukrainian Catholic community in the UK. And something else not in the original church, a few confessionals.

It might seem like a bit of a stretch to use Putin’s war on Ukraine as an excuse to visit a cathedral, but I eased my conscience by donating to the cathedral’s collection box. And you too.

COMMENT: A time of judgment for Roman Catholic churches and parishioners in Newfoundland and Labrador