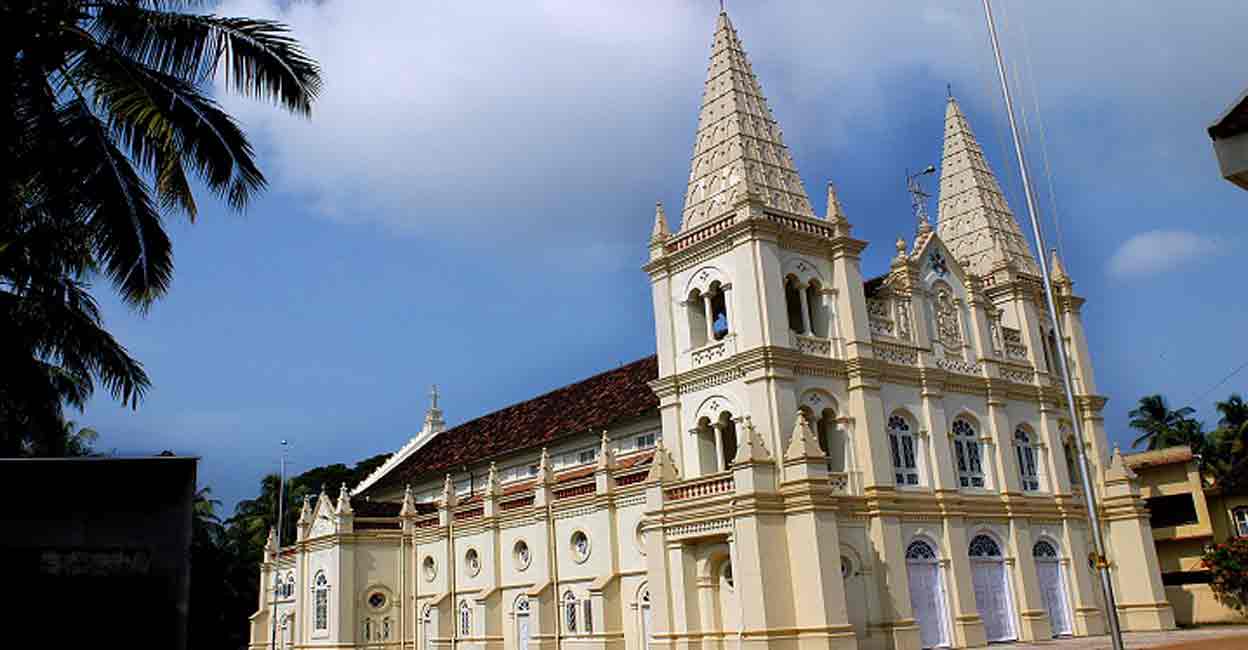 When Moscheni painted Renaissance-style art in a Kochi cathedral

When Indian tourists visit churches in Italy, they are often mesmerized by the beauty of their interiors and end up paying close attention to canvas paintings, frescoes and murals depicting various stories related to Christ and his disciples. Few of these tourists would be aware of the fact that a few Catholic churches in India also have absolutely magnificent works of religious art painted by Italians educated in the best schools in their country.

A church in Kochi houses the work of Antonio Moscheni, who was born in Stezzano in Italy’s northern region of Lombardy. The church in question – the grand Basilica Catedral da Santa Cruz or the Cathedral Basilica of Santa Cruz is one of the most eye-catching buildings in Fort Kochi. Consecrated in 1905, it was built to replace a cathedral that stood in the area now occupied by a children’s park. The original church was built in 1505, when Cochin was under Portuguese rule, and even managed to survive a wave of Dutch destruction of Catholic structures. It was demolished by the British when they occupied Cochin at the end of the 18th century.

About 90 years after the demolition of the cathedral, the idea of ​​rebuilding it began to take shape. Under the direction of the then Bishop of Cochin, Joao Gomes Ferreira, construction work began in 1887. The project spanned the better part of two decades, and it was Bishop Ferreira’s successor, Bishop Mateus de Oliviera Xavier, who took over the torch from 1897. to resemble those of some of Europe’s famous cathedrals, Bishop Xavier contacted Antonio Moscheni, an Italian painter turned Jesuit friar who had made himself a name in India.

From Bergamo to Mangalore

A young Moscheni studied art at the prestigious Accademia Carrara di Belle Arti di Bergamo, where under the guidance of the most accomplished masters of his time he learned advanced techniques. He went to study Michelangelo’s masterpieces in the Vatican and developed his own unique style. By the 1880s Moscheni had become a celebrated painter, and many churches in northern Italy housed his works, including the Sanctuary of Madonna dei Campi in his home town of Stezzano. In 1889, when Moscheni was at the height of his fame as an artist, he decided his true calling was with the church. Aged 35, the artist entered the Jesuits as a lay brother. Wanting to fully exploit his potential as an artist, the Jesuits sent him to Albania to paint frescoes in churches.


He remained in Europe for nearly a decade, painting church interiors in Croatia, Piacenza and Modena. It was in 1898 that Moscheni was invited to paint the interiors of the chapel of St Aloysius College in Mangalore.

The interiors of the chapel were entirely painted by the Italian, who originally planned to return to Italy once his work was completed in Mangalore. However, his depiction of the life of Saint Aloysius and the frescoes of Jesus Christ and his apostles won Moscheni instant fame in India. The Jesuit brother had even taken an interest in Indian religions and customs and one of his paintings on the university campus depicted the goddess Saraswati.

Moscheni’s stay in India continued into the early years of the 20th century. In 1903, Bishop Xavier of Cochin invited the Italian Jesuit artist to paint the altar of Santa Cruz Cathedral. Aided by one of his prodigies named De Gama, Moscheni worked for the next two years at the church.

The work included murals and frescoes of angels and saints, as well as paintings on canvas depicting important moments in the life of Jesus Christ, such as The Last Supper, inspired by Leonardo da Vinci’s iconic painting. The ceiling of the cathedral was adorned with paintings depicting scenes of Christ on the day of his crucifixion.


As Moscheni and De Gama were finishing their paintings on canvas, murals and frescoes, the Italian artist fell ill with dysentery. He managed to continue working despite his discomfort, but succumbed to his illness in November 1905, just four days before the cathedral was consecrated. He was 51 years old.

Moscheni was buried in Kerala, but clergy members are unsure of the location of his grave.

The legacy of the Jesuit painter is something that Kerala, Karnataka and Italy should jointly celebrate as he was one of the greatest cultural bridges between India and Italy.

(Ajay Kamalakaran is a multilingual writer, mainly based in Mumbai)

Jesuit Moment of Silence in Mexico for Murdered Priests | Christianity