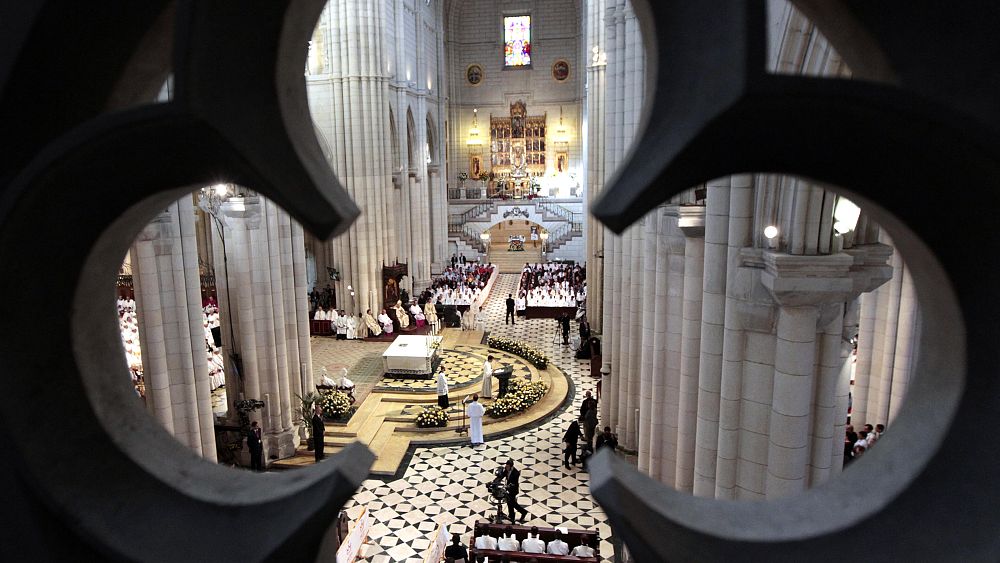 Why does the Spanish Catholic Church refuse an independent investigation into allegations of sexual abuse?

Activists call for an independent investigation into allegations of sexual abuse in the Spanish Catholic Church.

They insist the number of cases is comparable to neighboring France, where a recent survey found 218,000 victims since 1950.

But as the gathering of bishops from the Episcopal Conference ended in Madrid on Friday, November 19, the church denied those claims.

Spokesman Luis Argüello reiterated that the institution would not be “proactive” in undertaking an external investigation into allegations of sexual abuse.

“We are not ready to carry out statistical and sociological surveys,” he said.

“There are only a few cases,” he added, citing the figure of 0.8% of priests guilty of such crimes since 1950. “Why is the focus only on the Catholic Church ?”

The denial comes as France, Ireland, Germany and Belgium conducted independent investigations after the US led the way in 2002; Portugal has also just appointed a national commission to do the same.

“Spain is in a paradoxical position because it is sandwiched between France and Portugal who have taken measures,” says Gema Varona, lecturer in criminal policy at the University of the Basque Country, who has presented in June an independent study on sexual abuse within the Spanish Catholic Church. with the University of Barcelona and the University Oberta Catalonia.

Even before the rally of the Spanish Catholic Church, the victims’ hopes for more accountability were dim.

The jamboree did not include meeting with the victims themselves despite many simply asking for their stories to be heard; stories like that of Enrique Pérez Guerra, who says he was abused by Father Javier, 60, when he was just 12 at the Carmelitas monastery in Zaragoza, Aragon province, in 1968.

“I wanted to be a priest and a missionary,” he told Euronews. “So I went to see Father Javier, to see if he could help me, and he told me to come to his cell on the afternoons he was abusing me. He was highly respected by my family and everyone around, and while the abuse continued, he came to our house for dinner. He came across as an affable and kind man. The abuse lasted five months until he was transferred to Andalusia. All the while, I was terrified that my parents would find out. I thought I was committing a mortal sin and asked him to confess, but he laughed in my face.

It took 10 years for Enrique to express himself.

“I hurt myself and failed in school and often zoned out,” says the 65-year-old who later wrote the memoir Hidden Afternoons. “I was terrified of becoming like Father Javier. Back then, being gay was confused with being a pedophile, so when I started dating the woman who is now my wife, I was relieved. But the guilt is still there; I still have dreams.

Emiliano Álvarez Delgado’s experience was just as, if not more, heartbreaking. He was allegedly abused by a pedophile network of priests at the San José de la Bañeza Minors Seminary in Castile and Leon in 1977 when he was just 10 years old.

“They entered the dorms at night and chose which bed they went to,” said the 55-year-old. “They pulled the covers off your bed and pulled your pants down and touched, kissed and sucked your penis. I never told my parents about it because they wouldn’t believe me and there was a climate of fear in the school and a lot of beatings. They would beat you for anything. Once they sent me flying 10 meters down a hallway, they hit me so hard. I don’t know what I was more afraid of – beatings or abuse.

Emiliano ran away from the seminary at the age of 12.

“I thought when I got out of there it would be over, but then comes the legacy,” he says. “In my case, it took the form of alcohol, drugs and prostitution. I’m fine now, but I’ll probably never fully recover from what they did to me.

‘Get over yourself’ was the message Enrique received when he was finally seen by the Bishop of Mallorca, Sebastià Taltavull, several years ago.

“I wrote to him three times and the third time he agreed to see me. He told me that I should forget the abuse and put on a good face,” he says.

According to Juan Cautrecosas, president of the Association for Stolen Children (ANIR), whose son was sexually abused while attending an Opus Dei school in Bilbao, recent statistics published by the Eglise indicating that 220 cases of abuse are being investigated is a far cry from reality, given that the Suavé report produced by the external investigation in France reports a minimum of 216,000 victims since 1950.

“It is absolutely false that the cases of pedophilia within the [Spanish Catholic] The church stands at 0.8%,” he says. “They manipulated the statistics in Spain, resorting only to the ANAR foundation for reports of abuse. But many victims did not report their abuses to ANAR, as brilliant as this foundation is. In Spain, the figures are similar to those of France, if not higher. There is a tradition of transparency in France while in Spain there is the Church’s feeling of impunity and the fear of reprisals from the victims.

The fear is not unfounded. When Juan and his wife reported his son’s abuse a year after it happened in 2010, the family was bombarded with threats that forced them to move out in 2013, Cautrecosas said.

“We received calls with the caller remaining silent then hanging up and we were stopped in the street by a sinister figure rubbing his hands and telling us we would pay for what we were doing. The school did nothing and sided with the priest who was given 11 years, which the Supreme Court reduced to two,” he says.

When Emiliano reported his abuse several years ago, he says the bishop allowed his surviving abuser to bring him to justice for making false accusations. His more recent checkered past was brought up and he was portrayed as a would-be delinquent.

Varona suggests that the 0.8% figure is just the tip of the iceberg.

“Given that it’s from 1950 – when Franco was in power and there were many religious schools – it’s not believable,” she says.

But the Spanish Catholic Church insists that any abuse is exceptional. In addition to this, the bishops have declared themselves to be pioneers in getting to the bottom of the allegations with a groundbreaking set of rules to strengthen the support offered by their offices for the protection of minors, which were created in March 2020 in each of the 70 dioceses of Spain under the orders of Pope Francis.

“It is not acceptable that they brag about alleged anti-pedophilia standards, declaring themselves pioneers, when it is already well known that their attitude of not being proactive in investigating their crimes betrays them. “, he says. “It is shameful and intolerable that they continue to deny and hide the truth. November 20 is International Children’s Day; it would have been an act of humanity and empathy if they had taken that into account before disrespecting children and their rights again.

Regarding the child protection offices, Varona says: “I know from the victims who have visited these offices that they do not feel well treated. You need to create an independent entity like Ireland’s Towards Healing.

So, will the Spanish Catholic Church be persuaded to open an investigation? After all, the hymn La Muerte no es el Final, composed by the late priest Ceráreo Gabaráin, who was accused of multiple cases of abuse while teaching at the Maristas religious school in Madrid, is still played by the Spanish armed forces and sung by King Felipe VI on National Day, with suggestions that it should be banned, was met with disbelief.

“Such a condemnation would be medieval,” spokesman Argüello said after the United States banned it in August.

Enrique mentions the 2015 movie Spotlight, the true story of how the Boston Globe reported child abuse within the local Catholic Archdiocese and says it’s sad the same thing isn’t happening in Spain .

“Any change here will be to a lesser extent,” he says. “The transition is not over, culturally speaking. There are still many taboos; we are not a free-thinking society; not a full democracy. It’s well known that you better be careful if you disagree with the clergy, and when people mean you’ve run into a brick wall, there’s the Spanish saying “You’ve run into the brick wall.” ‘Church”.

At the end of the 117th Assembly of the Spanish Episcopal Conference, some of the alleged victims might feel just that.

Euronews asked the Spanish Catholic Church to comment on this article, but they had not responded at the time of publication.

Every weekday at 1900 CET, Uncovering Europe brings you a European story that goes beyond the headlines. Download the Euronews app to receive an alert for this and other breaking news. It is available on Apple and android devices.