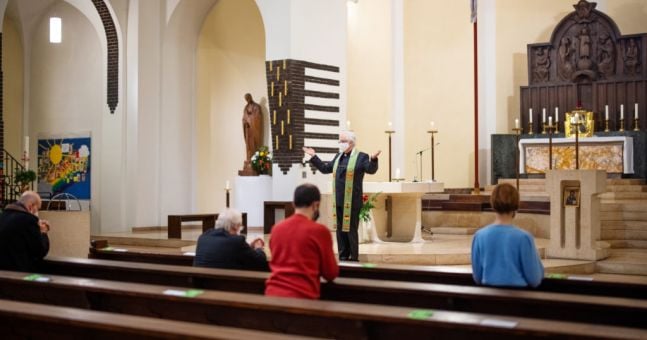 It IS the right of a diocesan bishop and his local pastor, we have been told by the Church, to decide on the delivery of the sacraments.

The right. From the church.

Church law, in this case, to break Covid regulations and create its own guidelines.

Bishops across this country, including more recently the Archbishop of Dublin, have decided that it is perfectly acceptable for priests to administer communion and confirmation.

Despite this, he is breaking government guidelines. Although this is against the guidelines of the Covid pandemic. The law of the Church and the decisions of our democratically elected government.

Whatever we think of the government politically or even its handling of the pandemic is irrelevant in this case.

It is not about the political tint of the Taoiseach or the TÃ¡naiste.

It is about the fact that we have a democratic system and that it works by electing a government that makes political, economic and social decisions.

In times of pandemic, it makes health decisions. These decisions are not made by publicans, restaurateurs or barbers or any other cohorts of groups that have fought under the restrictions of Covid.

They are not made by the GAA, the League of Ireland or the IRFU.

They are carried out, after extensive health advice by medical experts, by the government.

Have they ever been wrong? Absoutely.

There have been confusing rules and rule changes. There were errors in the deployment of the vaccine. There were some mistakes.

People remained angry, confused and disoriented. And fed up.

God only knows we are all fed up. But, and again, regardless of political beliefs, governments do not have much experience with pandemics. Governments anywhere.

Has Trump played the game with people’s lives? Does Johnson? Yes they have. These are flag-waving populists who made a bet instead of trying to lead. But even good, responsible and competent governments invented it as they went along. How could they not be?

Who else, however, did you want to make the decisions? Errors, even?

Who if not your elected officials?

As imperfect as our democratic systems are, what is the alternative? The crowd at the Capitol?

The Catholic Church is certainly an organization from which we might expect a little humility.

After all that has been revealed over the past decades about the utter depravity at the heart of the Church’s governance when she was in power, the least one might expect the Church to be align.

Of course, we’ve had rogue tax collectors and rogue retailers.

We’ve had a number of conspiracy theorists denying the reality.

We had the strange refusal of masks, which complicated the traders and wasted the time of the courts.

We have had right-wing politicians who uttered embarrassing nonsense.

But we haven’t had any organization on this island stating that they have the unilateral right to make their own rules. To follow its own guidelines.

We’ve all seen pop stars and musicians on this island act like they know better than the doctors.

But the bishops? The church?

Of all the actors in Irish society, don’t we think that the Church can recognize that she should take a back seat.

His arrogance clearly did not diminish with his power.

Irish society is reopening in a delicate way. The response to the pandemic relied heavily on a sense of social solidarity.

The Archbishop of Dublin’s recent assertion that the health guidelines are “discriminatory” is worryingly childish.

Is he claiming that health guidelines were developed in an attempt to restrict the Church?

Is he suggesting that any sector of the economy or any sports organization that is affected by the guidelines can claim discrimination and set its own rules? Who the hell does Archbishop Farrell think he is? Bishop McQuaid?

That the Church implements policies to formally break social solidarity tells us a lot about the Church’s perspective on Irish society.

Society, yes, says the Church, but the Church first.

This pandemic will end. We are going to get out of this.

Ireland will become Ireland again. And when it does, we would do well to remember the collection of those who opposed collective responsibility and the solidarity of society.