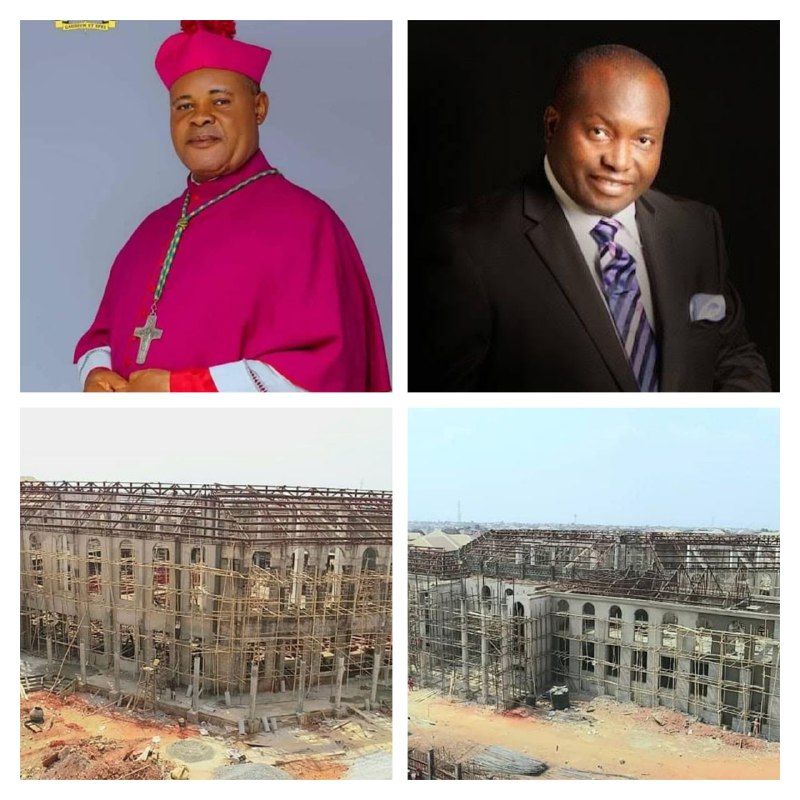 New facts have emerged on the real reasons why the Catholic Diocese of Nnewi decided to resume the construction of the Cathedral of Our Lady of the Assumption Okwuani, Nnewi, which was said to have been built single-handedly by Senator Patrick Ifeanyi Ubah.

It will be recalled that IDOMA VOICE earlier last week broke the news of the appeal of the new Bishop of the Catholic Diocese of Nnewi, Bishop Jonas Benson Okoye, who appealed to the Catholic faithful within and beyond the Diocese to unite for the completion of the cathedral.

New facts have emerged that Bishop Benson’s decision was largely due to Senator Ifeanyi Ubah’s debt to the Catholic Diocese of Nnewi, which currently owes the Diocese over N200 million.

Anaedoonline.ng reports that Senator Ifeanyi Ubah has yet to repay the diocese an estimated N224 million naira that Senator Ubah authorized the diocese to spend on the construction of the cathedral, at various stages when he does not. was not financially stable.

Giving a detailed explanation, a member of the Cathedral Building Committee who pleaded for anonymity for fear of victimization said the claim that Senator Ubah is single-handedly building the cathedral is false.

According to him, the Catholic Diocese of Nnewi spent over 200 million naira on the construction of the cathedral at different stages when Senator Ubah appealed to the diocese that he was having financial difficulties, he revealed that although the senator Ubah promised to return the money to the diocese, it is still to be done till date.

Giving historical context on how the building began, he said: “When our former Bishop, His Lordship, Bishop Hilary Paul Odili Okeke started the Cathedral renovation movement, the founder of Cutix Cables PLC, the Chief Dr. Ajulu Uzodike was appointed Chairman of the Cathedral Building Committee, many prominent members of Nnewi Catholic Diocese made donations, which number in the millions”

“The day Ifeanyi Ubah came, instead of making his own donation, we were surprised when he said he would demolish the cathedral and build a new one within seven (7) months. The bishop called him to check if he was serious, he told the bishop he was more than financially capable of building the cathedral.

“Some prominent Catholics and even the chairman of the construction committee, Chief Ajuju Uzodike, told the bishop that he was not comfortable with the move and advised the bishop against accepting the offer, but the bishop felt that Ifeanyi Ubah was capable of doing so, and gave his express approval for the demolition of the cathedral”

“After months of several delays, he started the building at a slow pace. Long story short, in 2017, when Ifeanyi Ubah was about to contest the election of Anambra Governor, Bishop Odili Okeke called him and told him of his desire to ensure that the cathedral be completed before his retirement, he informed Ifeanyi Ubah that he had barely five (5) years to retire and it will look embarrassing if the cathedral is not completed before his retirement, Ifeanyi Ubah told the bishop that he was not financially buoyant that if the diocese had money he should put it into the project, that he will surely repay the diocese later, the bishop being compassionate began to approve of money for the project on behalf of the diocese »

Speaking further, he said, “When it started, when the money was to be spent, Ifeanyi Ubah will be informed, as usual, he will give his approval and promise that he will return the money. This has continued to this day although at some point he will pay money but he still owes the diocese more than 200 million naira which is still on file with the diocese”
“In 2020, when it was clear that Ifeanyi Ubah was no longer engaged in the completion of the cathedral, Bishop Okeke began appealing to individuals to at least cover the cathedral before it was released, individuals like Chief Cletus Ibeto, Chief Innocent Chukwuma (Innoson), Chief Sir. Louis Izuchukwu Carter Onwugbenu and many others made donations which is why the cathedral was roofed and the cathedral altar built”

On why the diocese decided to take over the completion of the diocese, he said, “When Bishop Jonas Benson Okoye succeeded Bishop Okeke, he was informed of the debt of Senator Ifeanyi Ubah, he said that he was not interested that his desire was to see that the Cathedral be completed before the next twelve (12) months, hence the need for everyone to join hands to complete the Diocese, but it should be known that it was the Diocese which built the Cathedral, not an individual”

Speaking further, he said he was surprised why Ifeanyi Ubah would continue to say that he was the one building the cathedral when he knew full well that was not the case and he even had to diocese if he actually built the cathedral. He advised the distinguished senator to refrain from smearing the name of Bishop Benson, who he said is not as soft as Bishop Okeke, who tolerated the lies and deceit of Ifeanyi Ubah who currently represents Anambra South Senatorial District.

He, however, appealed to the Catholic faithful to give the necessary support to the new bishop who he said is determined to see to the completion of the cathedral.

Road to Kossuth Square #2 – Why is Christianity so important in Hungarian politics?