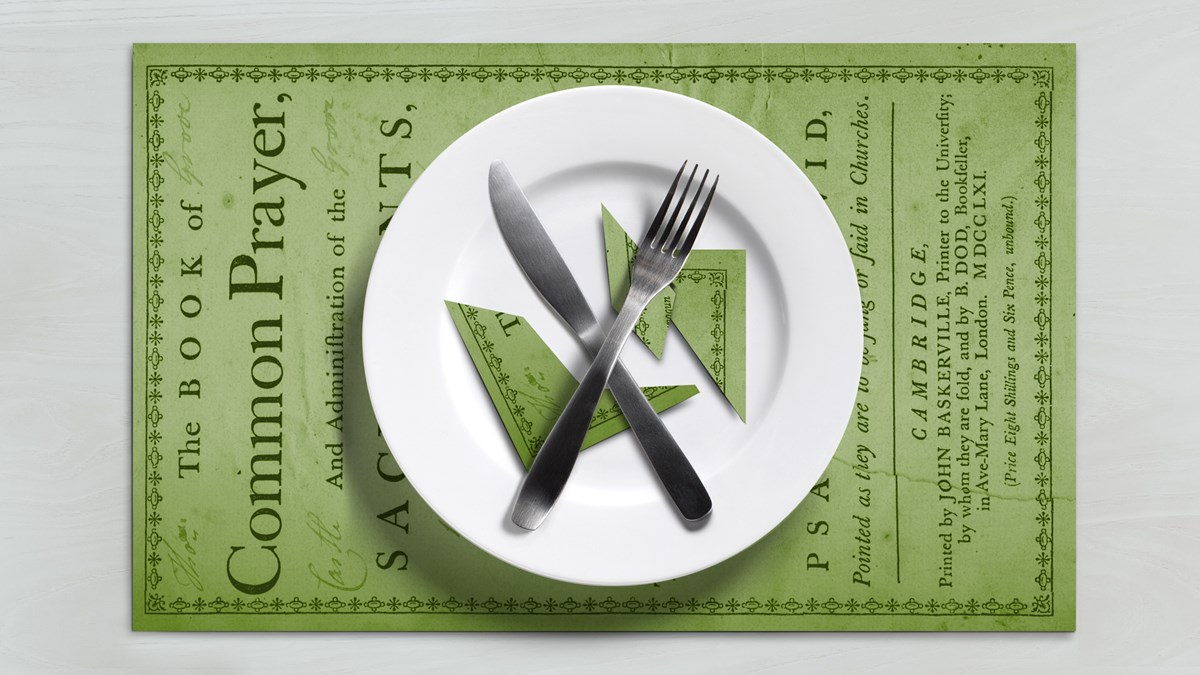 Why we should not practice liturgy “à la carte”

If you had told an evangelical pastor in 2005 that the Book of Common Prayer might soon be trendier than church lobby cafes, he would almost certainly have laughed.

Not too long ago, countless evangelical churches abandoned the use of prayer books and traded their hymns for high-resolution projectors. Using the historical church calendar to order services became a rarity as most churches began to develop thematic sermon series or preach through the Bible one book at a time.

Liturgical prayer and call-and-response confession were dropped, and even church names changed in ways that strayed congregations from their denominational roots — as many Hometown Baptist churches became one Wellspring Christian Community.

In short, the rhythms, readings, patterns and prayers of historical liturgies are definitely out of fashion.

However, in recent years, a new trend has emerged. Anyone who spends time among Christians in their twenties or early thirties has probably noticed a major increase in the use of the word liturgywhich has become commonplace both in corporate worship and in private spiritual practice.

Even some non-denominational churches that sought to distance themselves from formal traditions a decade ago began systematically ending services with doxology or adopting the use of long-standing and simple formulas of call and answer like “This is the Word of the Lord”. Thanks to God.”

Many young Christians find spiritual vitality and constancy where they least expect it, and there is much to celebrate in this recovery of the beautiful prayers and practices of our ancestors in the faith.

However, this trend is not without drawbacks. As liturgy returns abstractly “in vogue,” young Christians have shown a disturbing tendency to change churches, denominations, or even traditions based on liturgical practice with little regard for doctrine.

In many cases, young evangelicals from the lower church flock to congregations whose worship aesthetics seem more ancient or orderly—particularly Anglican, Catholic, and Orthodox churches—either without realizing their denominational differences, or, in some cases, simply ignoring them.

In the well-meaning pursuit of a richer life of worship and a sense of spiritual heritage, these “aesthetic converts,” we might call them, run the risk of separating the historical and doctrinal content of worship from a church of its outward and artistic expressions.

Of course, a church member need not agree with every minor point of doctrine in the church’s statement of faith – and in many cases an appreciation of the liturgy is only the first step in a thorough examination of the teaching and practices of a church or tradition.

Prominent New Testament scholar Michael Bird recounted his own journey to Anglicanism in similar terms. He said it was a deep appreciation for the Book of Common Prayer that sparked his move from Presbyterianism to the Anglican Church.

There is nothing wrong with allowing the spiritual nourishment of historical liturgy to lead you into a serious pursuit of God, when coupled with a diligent search for biblical truth. This pursuit can still lead you to a new tradition, or simply push you to deepen the historical worship of your own tradition.

A Baptist, for example, can use and appreciate the Book of Common Prayer without converting to Anglicanism, especially if the intricacies of Anglican teaching conflict with some of his other beliefs. But perhaps his appreciation of their historical tradition might lead him to dig into Baptist history and find examples within that stream.

For example, Rodney Kennedy and Derek Hatch’s book To gather argues that Baptists can and should explore both the legacy of their own tradition and the contributions of others to address what they call “the relative scarcity of resources for Baptists in the United States related to the practice of worship”.

Alternatively, a lifelong Pentecostal may be drawn to the sense of tradition and ancient continuity in the Eastern Orthodox Church. She could explore its teachings – in all their cultic and doctrinal depth – and ultimately choose to become Orthodox on that basis.

Winfield Bevins argued in his book Always old, always new: the attraction of the liturgy for a new generation that such heartfelt and thoughtful migrations paint a hopeful counter-narrative to the usual tendency of young people to simply leave the church behind.

But what should be avoided, I believe, is to migrate from one tradition to another exclusively because of its external forms, without consideration for the heart of its doctrine. The aesthetics of worship, for example, is a good and vital thing, but it should not be elevated above the substance of that worship, nor obscure it.

If the fashion for liturgy can separate worship practices from their underlying theology, there is a very real risk that we will cheapen the liturgy and weaken its spiritual usefulness. The historic Protestant distrust of the liturgy, despite all its negative side effects, has well-meaning roots in its response to the spiritually dead ritual religiosity that prevailed in the Middle Ages.

Even the modern Catholic Church recognizes this danger. In 2019, Pope Francis warned a group of cardinals about the dangers of “do-it-yourself” liturgy, calling the liturgy a “living treasure that cannot be reduced to tastes, recipes and currents. .not ‘the do-it-yourself domain’. ‘, but the epiphany of ecclesial communion.

When personal liturgical practice is not coupled with holistic discipleship and consistent engagement with a genuine community of other earnest followers of Christ, it can quickly become little more than a habitual form of self-medication.

A la carte liturgy may offer a sense of coherence in a chaotic world – and perhaps be slightly beneficial from a mental health standpoint – but as a way to truly “practice the presence of God” it is rapidly losing its usefulness and unfortunately becomes watered down. .

Let me make a few brief clarifications before offering some potential solutions.

First, it should not be interpreted as some sort of defensive posture against churches with more liturgical forms of worship. The heart of the problem is not intra-Christian “conversion,” but the danger of separating doctrine from devotional rituals. Church leaders on both sides of the liturgical divide—in other words, churches that are losing members and those that are gaining them—should be equally cautious of this trend.

Second, warning against the separation of liturgy from its substance in no way means that congregational expressions, liturgical or otherwise, are merely an aesthetic cover for propositional theology. On the contrary, it is precisely because authentic practices of prayer and worship are so essential to the Christian faith that we must preserve the unity and integrity of liturgy and theology.

In fact, when properly understood and practiced, the liturgy is a kind of theology – insofar as it is an exercise in true worship and fellowship with God. This unity must be defended against the accidental erosion that occurs when well-meaning exploratory worshipers neglect to ponder the meaning and significance of certain prayers or practices.

With this concern in mind, where should we go from here?

I believe we should aim to reunite a rich, rhythmic liturgy with the depth of biblical truth and theological reflection that inspired it. The Book of Common Prayer is powerful and beautiful precisely because it is so carefully grounded in the words of Scripture and the theological convictions of English reformers like Thomas Cranmer.

In his book Theological recovery for evangelicals, Historical theologian and Baptist pastor Gavin Ortlund argues that “we can and must strengthen the vitality of evangelical Protestantism by thinking about our historical identity with greater scrutiny and self-awareness and by doing theology with a greater commitment conscious with conventional creeds, denominations and creeds. theological texts of the Church.

To this end, I urge churches and Christians to tap into your heritage! Whether you are Presbyterian or Pentecostal, Orthodox or Methodist, your church is rooted in a tradition of faithful believers who have gone before you and laid the foundation for your community of disciples. Rather than cutting the branch you’re sitting on by moving away from denominational labels, do what you can to learn your story.

As Paul asked the Corinthians to imitate him as he imitated Christ, you can find examples of faithful imitation of Christ in the history of your church and your tradition.

Research the creeds, denominations, and catechisms that have shaped your church’s theology. Identify prayers, hymns and other forms of worship that flow from your tradition. They may not all be to your liking, but at the very least they can point you precisely to your place in the tapestry of gracious provision that is the history of the Church of Christ.

For those in leadership positions in our churches, I offer another suggestion: teach your church history to your members! Chances are many of your congregants know next to nothing about your individual church’s history and broader denominational heritage. Young believers may well feel historically unmoored not because their church lacks a rich history but simply because no one has ever shared it with them!

As the next generation of Christians rediscover the prayers and praises of our predecessors, let us reintroduce ourselves and our churches to our ecclesiastical history, in all its diversity and complexity.

God willing, a renewed love for our own liturgical heritages should prove to be a much more fruitful trend than more church cafes – and it’s much less likely to leave stains on the sanctuary carpet.

Benjamin Vincent is a youth and young adult pastor at Journey of Faith Bellflower in Bellflower, CA and a history and theology teacher at Pacifica Christian High School in Newport Beach, CA.