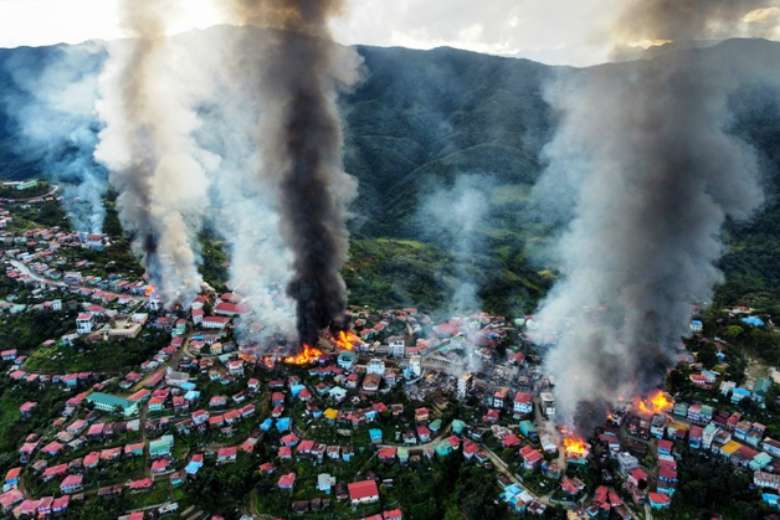 St. Nicholas Catholic Church in the deserted town of Thantlang, Chin state, western Myanmar, was burnt down by the military on November 27, local media reported.

The Chin Human Rights Organization (CHRO) said the junta set fire to many houses in Thantlang on November 26, keeping them on fire for three consecutive days as soldiers continued the arson attacks.

The nearby church was among dozens of structures destroyed by the fire, according to CHRO.

The latest attack came days after at least 49 buildings, including the Thantlang Centennial Baptist Church, were set on fire.

More than 300 homes, including four churches, have been destroyed by military arson in the city since September.

At least 22 churches were set on fire or destroyed by the military as well as more than 350 civilian homes in Chin state between August and November, according to CHRO.

The predominantly Christian Chin State has been at the forefront of resistance to the junta and has witnessed fierce military attacks, including airstrikes, heavy artillery, and indiscriminate attacks on people. civilians. Hundreds of people have been arbitrarily detained and dozens have been killed.

More than 10,000 residents of Thantlang had already fled their homes as the army targeted homes in incidents of indiscriminate shooting and shelling in September.

Religious leaders, including Pope Francis, have called on the military not to target religious buildings because places of worship are the cultural property of a community covered by international protocol.

Bishop Peter Hla of the Diocese of Pekhon in southern Shan State also called on the military not to attack cathedrals and other religious buildings.

The prelate’s call came after the army bombed the Sacred Heart Cathedral in the city of Pekhon three times in five months.

The Diocese of Pekhon is one of the worst affected areas along with the Diocese of Loikaw in Kayah state due to the escalation of the conflict since May.

More than 130,000 civilians have been forced to seek refuge in churches, convents and makeshift camps even as the military targets priests and pastors, bombarding and vandalizing churches in the predominantly Christian region of the States of Kayah and Chin.

The latest military assault on Christians in ethnic Myanmar regions is not the first time the minority has been attacked and targeted. Christians have borne the brunt of the decades-long civil war and have been persecuted by the military, which ruled for more than five decades.

â€¦ .As we move into the final months of 2021, we ask readers like you to help us keep UCA News free.

For 40 years, UCA News has remained Asia’s most trusted and independent Catholic news and information service. Every week, we publish nearly 100 news exclusive and in-depth reports, features, commentary, podcasts and video broadcasts, developed from a world view and the Church through discerning Catholic eyes.

Our journalistic standards are as high as those of the quality press; we are particularly focused on a rapidly growing part of the world – Asia – where in some countries the Church is growing faster than pastoral resources can meet – South Korea, Vietnam and India for n ‘name just three.

And UCA News has the advantage of having in its ranks local reporters covering 23 countries in South, South-East and East Asia. We report the stories of the local people and their experiences in a way that the Western media simply does not have the resources to reach. And we report the dawning life of new Churches in ancient lands where being Catholic can sometimes be very dangerous.

With declining support from financial partners in Europe and the United States, we need to appeal for support from those who benefit from our work.

Click here to find out how you can support UCA News. You can tell the difference for as little as US $ 5 …

Douglas native Phil Saviano who spoke out against sex abuse by Catholic Church clergy, remembered as a ‘hero’